J N DARBY was the youngest son of John Darby of Leap Castle, King´s County. The year of his birth, at Westminster, was 1800; that also of E. B. Pusey, who was to champion Anglo-Catholicism; and the career of each ended in the same year. The name "Nelson" was derived from the connection between his uncle, Henry Darby, commander of the "Bellerophon" in the battle of the Nile, and the famous admiral, Lord Nelson. He was educated at Westminster School, then at Trinity College, Dublin, where he graduated in 1819 as Classical Medallist. He was called to the Irish Chancery Bar, but soon afterwards, in 1825, took Deacon´s orders from Archbishop Magee, by whom he was priested the next year. He was appointed to the Wicklow parish of Calary, residing in a peasant´s cottage on the bog.

The Viscountess Powerscourt, from attending Drummond´s Albury Conferences on Prophecy, started like meetings at her mansion near Bray, through which Darby met A. N. Groves and J. V. Parnell (Lord Congleton), introduced by his friend J. G. Bellett, who was in touch also with Edward Cronin and others like-minded in Dublin. All of these vindicated the functions of the Holy Spirit and the Christian hope, generally neglected. Darby, constrained by the Scriptural view of the Church as independent of the State, relinquished his parochial position in 1827, and in the next year completed his separation from the Establishment by "breaking bread" in Dublin with some of the above-named associates.

He had also become acquainted in Ireland with Francis William, brother of John Henry (Cardinal) Newman. The younger of these, who was a Fellow of Balliol College, had so distinguished himself in the Oxford schools that, when presented in 1826 for the B.A. degree, the whole congregation rose in his honour. He became tutor to the family of Mr. (Chief Justice) Pennefather, Darby´s brother-in-law. Thrilled by the personality of J.N.D., Newman persuaded "the Irish clergyman" to visit Oxford in 1830, and then introduced to him a former pupil, Benjamin Wills Newton, another First Classman, who was a Fellow of Exeter; G. V. Wigram of Queen´s, Lancelot Brenton of Oriel; and W. E. Gladstone (afterwards British Premier) of Christchurch, also met Darby, but succumbed to the influence of the elder Newman, who just then was select preacher before the University.

Benjamin Wills Newton, who was a native of Plymouth brought about a visit by Darby to that town, strongly evangelical through the ministry of Dr. Hawker, and influenced by the "separation" principles of John Walker, another Irish ex-clergyman. By the year 1832 a "gathering" of believers "to the name of Jesus," the first of its order in England, was definitely formed there. James L. Harris, resigning his local incumbency of Plymstock, united with the brethren, and started their first organ, The Christian Witness, to which J.N.D. contributed. S. P. Tregelles, the textual critic, who was Newton´s brother-in-law, was "received" in 1836; after R. Chapman, at Barnstaple, and H. Craik with G. Muller, at Bristol, had taken a like position. Great simplicity and devotedness marked the company in those golden days.

In the year 1837 Darby carried the "testimony" to the continent, beginning with Methodists in Switzerland, so that by 1840 several French-speaking congregations had been formed, when his lectures on the hopes of the Church of God were delivered at Geneva. It was from his Etudes sur la Parole that the "Synopsis of the Books of the Bible" was produced.

Revisiting Plymouth in 1845, he found considerable departure from the teaching maintained elsewhere on ministry, justification, the secret rapture, etc. J. N. D. withdrew from the meeting as dominated by Newton, and the first division amongst those called ´brethren´ had happened.

After developing the work in France, from 1853 Darby laboured amongst Baptists in Germany; and assemblies of believers arose at Dusseldorf, Elberfeld, etc., for whose use he produced the "Elberfeld Bible." Amongst others, Fraulein von Bunsen, amanuensis of her father the Chevalier, united with the Darbisten, so-called. During meetings of the Evangelical Alliance at Berlin, J. N. D. met Dr. Tholuck (cf. "Autobiography of G. Muller"), to whom he explained his views on gifts. The Halle theologian agreed that such was the primitive system, but queried if it could still be realised. Darby´s very pertinent reply was, "Have you ever tried?" He provided his French-speaking associates with the "Pau Bible," and rendered like service to brethren in Great Britain. His English version of the New Testament, which Drs. Field and Weymouth have independently turned to account, was before the revisers in the seventies, and a complete edition of his English Bible appeared in 1890

From 1859, besides the fields of labour already mentioned, J.N.D. ministered in Canada, the States, the West Indies, and New Zealand; also in Holland and Italy.

For fifty years he was strenuously engaged in original exposition of Scripture. The "Synopsis," recommended by Bishop Ellicott to the Gloucester theological students, acquired amongst J.N.D.´s adherents authority like that commanded by Wesley´s "Notes" amongst Methodists. Professor Stokes has described it as "the standard of appeal. Every departure from that model is bitterly resented" ("Expositor´s Bible," Acts 1, page 382). But nobody has protested against such use of his writings more than Darby himself, for whom truth was "a growing tree" (C. W., XXIII, page 191). J.N.D.´s ordinary style is repugnant, and in his correspondence reference is made to this as having exercised him. By contrast, his living ministry was matchless and his "spiritual songs" are powerfully beautiful. Weakness in detail was another of his limitations. Nevertheless, in his own generation he singularly served the counsel of God. His criticism of that which he deemed error is usually trenchant and luminous. 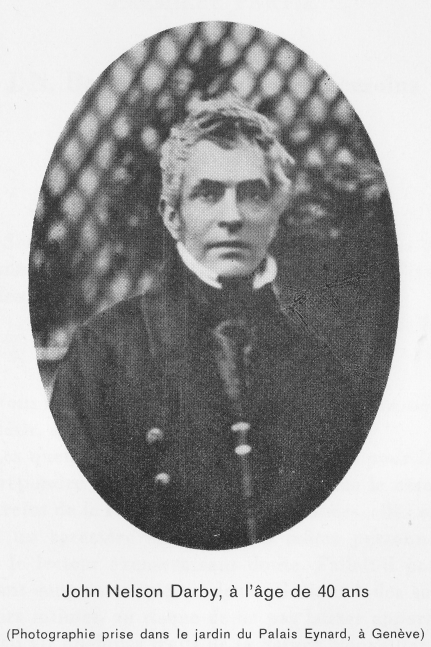 The governing idea is the ruin of the Church, or apostasy of the dispensation (C. W., I, p. 192), which was his "burden" ("Correspondence," I,, 52); but he could echo words of Calvin (commentary on Ps. 102:14): "The sadder the desolation into which the Church has been brought, the less ought our affection to be alienated from her" Loof´s criticism of Darby´s conception of the apostolic Church as "an organised visible society" (C. W., XX, 450, cf. "Correspondence," II, 245, 278), that "Church" with him meant "that which the Protestant faith has always made of it" fails, because J.N.D. did not accept Augustine´s distinction. He found "the essential principle of unity" ("Correspondence," I, 114) in the operations of the Holy Spirit. The Bishop of Birmingham considers him wholly wrong here; but then Dr. Gore´s view of the relation of the Church to the Bible is very different from that of J.N.D. No one, indeed, rightly instructed, pretends that the position — one of weakness, as J.N.D. always said — is a logical one; none, for that matter, is to be found, pace Bishop Gore, outside Rome, as to which Darby held that the "historical" Church is a caricature of that exhibited in the New Testament. A controversy (1866) over his papers on the sufferings of Christ arose only from the objectors´ failure to seize his real position.

J N D wrote many hymns, including "Hark! ten thousand voices crying," "O Lord, Thy love´s unbounded", "Rest of the saints above", "Rise, my soul, thy God directs thee", "This world is a wilderness wide" and others which are sung world-wide. A volume of the poems has been issued.

Of the first little band in Dublin, already Groves, Bellett, and Cronin had passed away — Lord Congleton shortly to do so — when the turn came of J.N.D., on the 29th April, 1882. In his closing days at Bournemouth he recorded that he knew of nothing to recall; that Christ had been his object. Although a born leader, he was nobly simple in habit and manner, equally transparent and trustful. He had nothing petty about him. As occasion arose he would throw off religious conventionality. His ministry was ever in close touch with his pastoral visitation, in which he engaged every afternoon. Even if weakness lurked in it, his strength of judgment came of the predominance that the moral aspect of any matter had for him. He lived in the Bible, and recommended "thinking in Scripture". May that similarly ever remain our sole spiritual food, mainstay, and weapon.

Extracted and modified from "Chief Men … " Pickering and Inglis.