I have been unable to find anyone who is able to give a character sketch of J McBroom.
Here is the scanty and unverified information that I have been able to collect concerning him.
My mother: Christine M. N. Hodgett (née Moyes) at the age of seventeen was saved under his preaching.
This was during the second world war and James McBroom would have been in his seventies.
My father was offered his library by his widow, but did not feel it right to accept it. [L.H.] 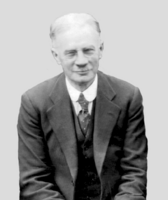 He came to a saving knowledge of the Lord Jesus Christ as a young man. He was a miner and was illiterate. It is said that, when he was saved, with the first week´s wages he bought a Bible, with his second wage he bought a concordance and with these he proceeded to teach himself to read and write.

His writings reveal the progress he made, that he had a very capable mind and the good use to which he put his self-education — to glorify the one who saved him. His vocabulary and the standard of his written English are not that of an uneducated man. Some may have to look up the meaning of the words he used — e.g. ´adumbrate´: (to represent in outline, foreshadow, typify - Concise Oxford Dictionary). He also learned sufficient Greek to assist him in his Bible study and teaching. He was known to quote secular writers such as Rabbie Burns and Shakespeare and compare them unfavourably with the Song of Solomon and the beauty of Scripture.

He was a dynamic personality and not one to hide his feelings. It is recounted that when singing (loudly) ´Oh the brightness of the glory shining in the Saviour's face´ he would beat time to it with his feet. The same enjoyment of the glory of his Lord is apparent in his writings, they are not voluminous but they are very largely bringing forth the glories of the Lord Jesus Christ.

He lost his first wife and all his six children to either tuberculosis or diphtheria. He remarried and his second wife Kathleen survived him. Mr. McBroom lived in the Kilmarnock area for most of his life, then latterly in Brighouse and then Port Seton near Edinburgh. He had depressive mental illness later in life and had to be in hospital for some time, perhaps related to his tragic family life.